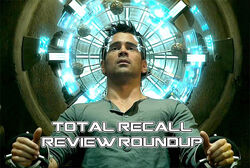 Len Wiseman's Total Recall remake is finally here! After a great deal of speculation, we finally get to see how it stacks up against the original. So, how good is the movie according to the critics? There is a stark contrast so far between critics and moviegoers - with Rotten Tomatoes showing a critic score of 32% (Rotten) but an audience score of 73%! A similar split can be seen on Metacritic where their critic score sits at 44/100 while users have it at a 7.1/10 rating. Check out our review round-up below for the answer to that question, and be sure to leave your opinion in the comments!

Score: 88/100
The richly constructed first hour is so superior to any feat of sci-fi speculation since "Minority Report" that the bland aftertaste of the chase finale is quickly forgotten.

Score: 75/100
Total Recall is well-crafted, high energy sci-fi. Like all stories inspired by Philip K. Dick, it deals with intriguing ideas. It never touched me emotionally, though, the way the 1990 film did, and strictly speaking, isn't necessary.

Score: 70/100
Total Recall is a doggone good time, with a bunch of nifty technical and visual flourishes, competently managed plot twists and elegant, Wachowski-esque action choreography that eventually becomes deadening because there's just too much of it and it's dialed up too high.

Score: 63/100
The movie marches in predictable formations as well. But when Biel's rebel pulls over in her hover car and asks Farrell if he'd like a ride, your heart may sing as mine did.

Thought it was just "okay"

Score: 60/100
The outcome is engaging enough, although not entirely satisfying from either a genre or narrative standpoint, lacking both substance and a degree of imagination.

Score: 50/100
For all of its dazzlingly rendered cityscapes and nonstop action, this revamped Total Recall is a bland thing - bloodless, airless, humorless, featureless. With or without the triple-bosomed prostitute.

Score: 50/100
So what makes this 2012 Total Recall superior to the Arnie model? For starters, there's an actual actor in the starring role.

Score: 50/100
Instead of drawing the audience in, the action scenes merely blur together. And the intriguing, thoughtful concepts at the story's core are glossed over.

Score: 50/100
The only laugh to be had in Total Recall, a ripsnorting sci-fi action extravaganza that starts well and works its way down to average, is in the opening credits, where we learn that the movie's primary production company is called Original Film. Really?

Score: 50/100
This one is somberly kinetic and joyless.

Score: 50/100
The new PG-13 movie is a fairly close adaptation of the Verhoeven, and lacks not just the earlier film's newness but its vigor, density, humor and R-rated juice. It's like the dinner-theater revival of a classic play, whose single asset is to remind those present how good the original was.

Score: 40/100
Like a drug that starts with a rush and ends with a headache, Total Recall is too much of a good thing.

Score: 40/100
This premise contains the seeds of an interesting economic and political allegory, but the ambitions of the filmmakers - lie in the direction of maximum noise and minimum sense.

Score: 38/100
As for a villain, you could do worse than Bryan Cranston as the evil political overlord who is trying to stamp out the resistance -- When he goes mano a mano with Farrell, it's not spine-tingling. It's embarrassing, like watching a dude beat up his dad.

Score: 30/100
The remake has no grace notes, or grace, no nuance, no humanity, no character quirks, no surprises in the dialogue and no humor.

Score: 25/100
The new Total Recall fails on the most basic levels: Its characters are dull, and its action is duller.

Score: 20/100
There's something sadly poetic about a movie dealing with disappearing memories that vanishes from your mind while you watch it.

Now it's time for Wikians to review Total Recall When you see it, post your thoughts in the comments or post your own blog! Let us know what you thought while experiencing the finale on the big screen!