Time Out of Joint

Edit
Time Out of Joint 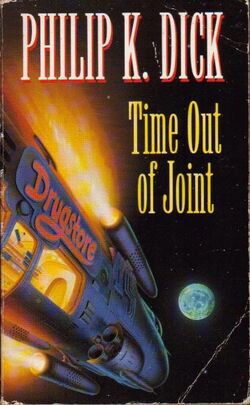 Time Out of Joint is a dystopian novel by American writer Philip K. Dick, first published in novel form in the United States in 1959. An abridged version was also serialised in the British science fiction magazine New Worlds Science Fiction in several installments from December 1959 to February 1960.

Time Out of Joint is Philip K. Dick’s classic depiction of the disorienting disparity between the world as we think it is and the world as it actually is. The year is 1998, although Ragle Gumm doesn’t know that. He thinks it’s 1959. He also thinks that he served in World War II, that he lives in a quiet little community, and that he really is the world’s long-standing champion of newspaper puzzle contests. It is only after a series of troubling hallucinations that he begins to suspect otherwise. And once he pursues his suspicions, he begins to see how he is the center of a universe gone terribly awry.

"This is a very strong book by Dick. The plot and characters are creative and well-developed. The setting and situations leave lots to the reader's imagination and employ strong elements of paranoia, schizophrenia and hallucination. The main character is placed in a universe where even the laws of time are controlled by an outside source. Written in 1959, Time Out Of Joint is a great example of Dick's earlier work. " Read more...

"Ragle Gumm is a perfectly realised example of the classic Dick protagonist; the paranoid man who discovers he has every reason to be paranoid because he inhabits a world where people know more about him than he does and reality itself is fluid. " Read more... 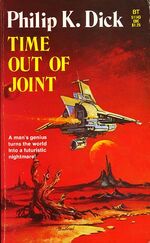 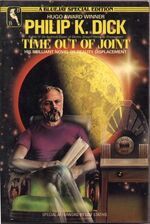 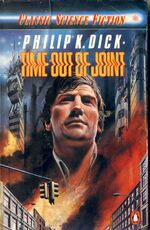 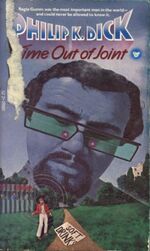 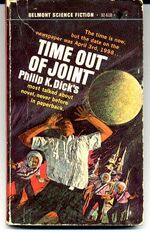 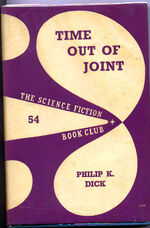 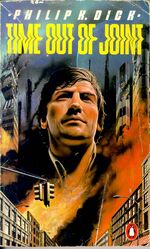 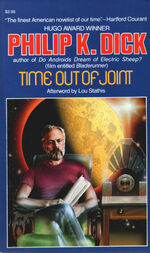 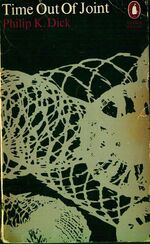