Start a Wiki
The Game Players of Titan 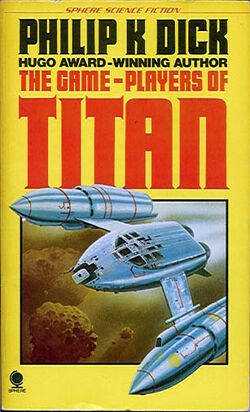 The Game-Players of Titan is a 1963 science fiction novel by American writer Philip K. Dick.[1]

Poor Pete Garden has just lost Berkeley. He's also lost his wife, but he'll get a new one as soon as he rolls a three. It's all part of the rules of Bluff, the game that's become a blinding obsession for the last inhabitants of the planet Earth. But the rules are about to change--drastically and terminally--because Pete Garden will be playing his next game against an opponent who isn't even human, for stakes that are a lot higher than Berkeley.

Pete Garden has lost his favorite property, Berkeley, and his wife, Freya. Moreover, Berkeley's new owner has sold it to a notoriously corrupt Bindman from the East Coast, Jerome Luckman. Pete misses Freya, and worries about the compatibility of his new wife. He is also attracted to Pat McClain, a mysteriously fertile woman living within his remaining property, as well as Mary Anne, her eighteen-year-old daughter. Pat is a telepath, while her husband Allen is precognitive, and their daughter manifests telekinesis. These telepaths resent the fact that they are not allowed to participate in the Game, due to possible abuse of their abilities during the contest. Pete breaks off his tentative relationship with Pat when he discovers that his new wife, Carol, is pregnant - a rare occurrence in this largely infertile, depopulated world.

Luckman, the new owner of Berkeley, is murdered, and Pete is implicated, along with six other members of his group, Pretty Blue Fox. However, Pete and the other group members are suffering from induced amnesia, and this only makes them look even more suspicious in the eyes of both vug and human law enforcement officials. Pete discovers that vugs are abusing their own psionic abilities to appear human. However, the vugs also have their own political factions, which further complicates matters. "Extremists" favour subversion and conquest of Earth, while "moderates" favour the status quo of paternalistic collaboration. Fertile humans begin an underground resistance against the vugs, but in the ultimate ironic twist, they are replaced by vugs posing as humans. Pretty Blue Fox syndicate members are teleported to Titan where they play a decisive end-Game with Titanian vug counterparts for the geopolitical future of the United States.

The game, Bluff, is administered by amorphous, silicon-based aliens from Titan, Saturn's largest satellite. These creatures, known as the vugs, are obsessed with gambling. In addition, the Game's exogamy helps to promote human fertility after the devastation of global warfare, after satellite-borne "Henkel Radiation" weaponry from Red China sterilized much of the Earth's population. The vugs exert hegemony over Earth but do not occupy it as such. Instead, it is visualised as a paternalistic relationship. Moreover, while the vugs are telepaths, they do not allow the use of human telepathy]] or precognition within the context of the Game. The vugs are also involved within human society, using induced hallucination to maintain the semblance of human form. They also perpetuate the charade through the use of physical human shells or simulacra.[1]

Pete Garden, the protagonist, is one of several residents who own large swathes of property in a depopulated, post-apocalyptic future world. These residents are organized in groups of regular competitors who play a board game called "Bluff". These contestants (or "Bindmen") stake their property, marriages and future status as eligible game players on its outcomes. Pete also experiences bipolar disorder, which may adversely affect his competence as a Game participant.[1]

"The book is readable and interesting. There are a number of nice minor touches, such as the artificially intelligent cars with attitude. And the character of Pete Garden, a fairly typical Dick protagonist, neurotic to the point of suicide attempts but basically decent, is nicely enough portrayed."

"The Game Players of Titan is very much a classic Philip K. Dick novel. It contains all the elements that we have come to expect; post-apocalyptic setting, self destructive male characters, confusion as to what is real, and so on, not to mention weird, trippy, hallucinations which are plentiful and important in this novel." 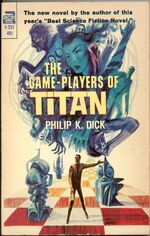 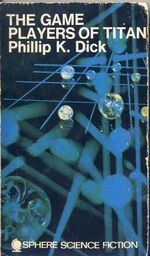 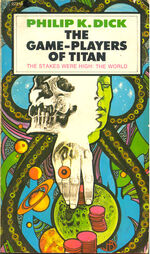 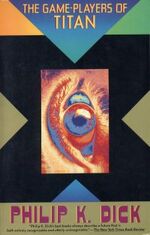 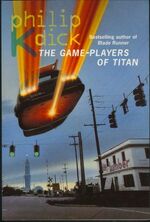 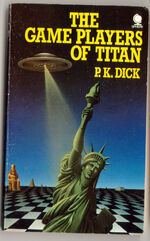 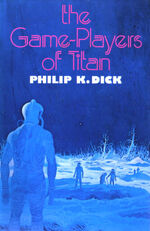 Add a photo to this gallery

Retrieved from "https://pkd.fandom.com/wiki/The_Game-Players_of_Titan?oldid=4964"
Community content is available under CC-BY-SA unless otherwise noted.