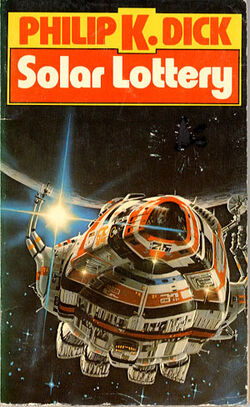 The year is 2203, and the ruler of the Universe is chosen according to the random laws of a strange game under the control of Quizmaster Verrick. But when Ted Bentley, a research technician recently dismissed from his job, signs on to work for Verrick, he has no idea that Leon Cartwright is about to become the new Quizmaster. Nor does he know that he’s about to play an integral part in the plot to assassinate Cartwright so that Verrick can resume leadership of a universe not nearly as random as it appears.

"Like his other novels, Dick's science fiction is not isolated from the cultural and political mood of the times. Even though one finds functional androids and telepathic characters, the main issues of Solar Lottery are based on real world fears and concerns. The portrayal of corporations and government are common themes Dick first explored here. One can also begin to see Dick's fascination with the android/human question he investigates in so many of his later novels. The concepts of Solar Lottery are the novel's strongest points. The political climate of Solar Lottery is a place where people are robbed of individuality and self-empowerment by their own perceptions of themselves, helpless and disconnected from the power structure. Imagining the situations and moral complications of the characters is a mind-bending task that makes sense in a twisted phildickian way."

"The script, the mood, the broken-linear-extrapolative future is so truly contemporary - how on earth could the average reader of 1950s' sci-fi have coped with this crazy dash through the lives and minds of those with such an overpowering political persuasion? Definitely a five star book!"