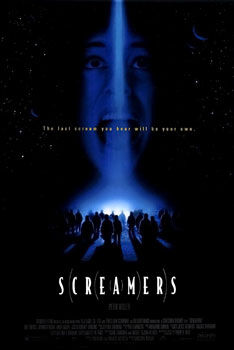 This action-packed sci-fi thriller is set upon the planet Sirius 6B in the year 2078. The planet has been decimated by a vast nuclear war. The few that have survived, but their continued survival is threatened by the dreaded screamers, strange shape-changing mechanical creatures who use razor sharp knives to hack up any life-form in their way. They earned their name because when they kill, they make a horrible high pitched sound. The first screamer makes its appearance as a lone soldier approaches a bunker. He has come to deliver an important message from the NEB (New Economic Block) to its enemy the Alliance. Unfortunately, the low flying screamer gets to the soldier first, and slices and dices the fellow into tiny pieces. Later a troop transport ship crashes near the bunker. Aboard it is a mostly dead crew and a nuclear reactor. One man survives the crash. The man is Private Michael 'Ace' Jefferson, he informs Commander Joseph A. Hendricksson and Lieutenant Commander Chuck Elbarak that the Alliance is again at war with the NEB on the planet Triton 4. The other soldiers and reactor on board the transport ship were on route to Triton 4. Knowing they are abandoned on Sirius 6B Hendricksson takes Ace and they travel across the great irradiated desert to meet with the NEB leader Marshal Richard Cooper. Along the way they find a small boy and though they don't want to, bring him along. Unfortunately, by the time they get to the NEB headquarters, the screamers have killed all but Private Becker, a tough soldier, Private Ross, who is nearly mad, and sexy smuggler Jessica Hansen. When Becker and Ross see the boy, they know he is a screamer and kill him. The group soon find themselves surrounded by the hellish killing machines, all of which have taken the shapes of small boys.[1]