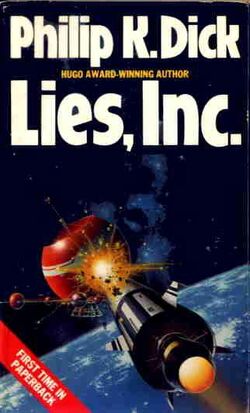 A masterwork by Philip K. Dick, this is the final, expanded version of the novella The Unteleported Man, which Dick worked on shortly before his death. In Lies, Inc., fans of the science fiction legend will immediately recognize his hallmark themes of life in a security state, conspiracy, and the blurring of reality and illusion. This publication marks its first complete appearance in the United States.

In this wry, paranoid vision of the future, overpopulation has turned cities into cramed industrial anthills. For those sick of this dystopian reality, one corporation, Trails of Hoffman, Inc., promises an alternative: Take a teleport to Whale's Mouth, a colonized planet billed as the supreme paradise. The only catch is that you can never comeback. When a neurotic man named Rachmael ben Applebaum discovers that the promotional films of happy crowds cheering their newfound existence on Whale's Mouth are faked, he decides to pilot a scapeship on the eighteen-year journey there to see if anyone wants to return.

This novel has an unusual history. Philip K. Dick wrote it during his very prolific mid-1960s period (he wrote ten novels in two years, 1963 and 1964). In a 1977 letter, Dick recalled: "Part Two of The Unteleported Man was written in 1964, a number of years after Part One was written-for Amazing-Fantastic, by the way, in response to a cover they had gotten and wanted to use. They needed a story to go with the cover, so they sent me a photo of the cover [painting] and I came up with 40,000 words, which was the maximum number they'd accept. Don Wollheim at Ace [Ace Books, Dick's primary paperback publisher at the time] said he'd like an expansion to use as a novel, rather than a 40,000-word novelette; however, Part Two did not please him, so he published the 40,000-word Part One as one half of an Ace double."

The records at the Scott Meredith Literary Agency show that the manuscript for "The Unteleported Man" (evidently the title was Dick's) was received by the agency on August 26, 1964 and that the manuscript of the requested expansion material was received on May 5, 1965. The short novel was first published in the December 1964 issue of Fantastic (one of two science fiction magazines produced by the same editor and publisher) and then the same short novel (without the rejected expansion material) was published as a paperback book by Ace in 1966. It was published in their "double book" format, with another short novel by another author (the back cover of each book was actually the cover of the other book, so the two novels were printed upside down to each other in the same volume; Dick's first published novel, Solar Lottery in 1955, had been such a "double book" and he'd had other novels published by Ace in the same format over the years).

Ace reissued The Unteleported Man, again as half of a "double book," in 1972. The novel was published under the same title, but with the previously unpublished expansion material added, by Berkley Books in 1983. This was because Dick in 1979 had gotten his editor at Berkley to agree to publish the novel with the rejected 1965 expansion added on. The Ace edition was out of print, so Dick had the rights back, and he knew he had a copy of the rejected expansion material in the collection of his manuscripts that he'd given to the library at California State University, Fullerton. The cover of the 1983 paperback says, "now uncensored for the first time," which is dramatic and somewhat misleading, since the previous editions contained every word of what had been published in Fantastic and originally submitted to and bought by Ace. Dick, of course, still unhappy that his expansion had been rejected in 1965, and eager to justify this new edition of the novel, had himself promoted this slightly misleading idea that the book would now be uncut for the first time.

When Dick obtained a copy of his 1965 expansion material from the Fullerton library, he found he had a problem. Four pages were missing from three different places in the manuscript, creating three gaps in the text that he now had to write new connective material to fill in. He also realized that this expansion wasn't exactly a "part two" that could be placed immediately after the rest of the book with no explanation. In the course of dealing with these matters, he got the idea of "reframing" the book by writing new opening pages and perhaps various bits of new connective material.

So, probably in a single day or a few hours, he wrote a brand new Chapter One, and rewrote the original Chapter One extensively to make a new Chapter Two, and found himself giving the book a new title (Lies Inc.) and made a few other small changes here and there for consistency with the elements introduced in the new opening pages. He also made the big decision as to where in the existing novel to place the large chunk of 1965 expansion material. He inserted it almost 3/4ths of the way through the original short novel, in the middle of the original Chapter Seven. But he didn't write the connective material to fill in those annoying gaps. That, and possibly some other thoughts he had about new material he should write to make the new book flow together properly, kept him from calling the job done and sending the rewrite off to his editor (Mark Hurst) in New York.

So it came to pass that in July 1983, 16 months after Philip K. Dick's death in March 1982, Berkley Books published an edition of The Unteleported Man that was twice as long as the 1964 Ace edition but did not use the new title or the recently written pages and that did have the anomaly of three gaps in the text of the second half of the novel.

This was not the end of the saga, however. Dick's U. K. publisher, Gollancz, had a contract to publish a British edition of the expanded Unteleported Man, and before the end of 1983, I, as PKD's literary executor, came across the revised and retitled 1979 typescript of the book and had it sent to Gollancz. There was still the matter of those missing manuscript pages, and so Gollancz, with the permission of Dick's estate, hired science fiction writer John Sladek to write short connective material to fill in the gaps (only two gaps now, because Dick's revisions deleted the last six pages of expansion material, which was the location of the third gap). So the book was published by Gollancz in 1984 with the 1965 expansion and Dick's 1979 revisions and Sladek's connective material, under the title Lies, Inc. Gollancz added the comma to the title, presumably for reasons of British style.

Then in 1985, while doing some research in the PKD papers at Cal State University's Fullerton library, I found the missing pages from the 1965 Unteleported Man expansion (they had found their way into a box containing manuscript material for Do Androids Dream of Electric Sheep?). Those pages were then published in the eighth issue of The Philip K. Dick Society Newsletter...and they are included in this (first American) edition of Lies Inc.

So this is The Unteleported Man, Take Two, as the author intended it in 1979, but necessarily without any further revisions he may have thought about making but never got around to. For the curious, the 1965 expansion material begins several pages into Chapter Eight of the current edition with the words "acrid smoke billowed about him," and ends halfway through Chapter Fifteen just before the paragraph (added by Dick in 1979) that starts, "Acrid smoke billowed about him." 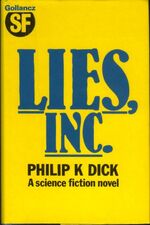 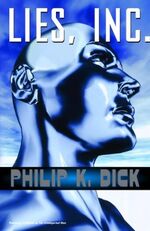