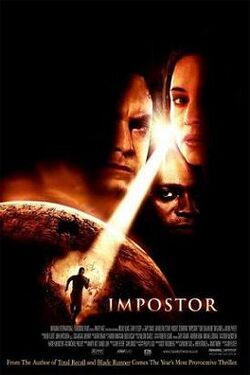 Director
Gary Fleder
Writer
Exec. Producer
Based on
Impostor
Tagline
In the future, not everyone is who they seem to be
Released on
January 4, 2002
Runtime
102 minutes
Budget
$40 million
Gross
$8,145,549
IMDb Entry

Impostor is a 2002 American science fiction film based on Philip K. Dick's 1953 short story of the same name.

Based on a 1953 short story by Philip K. Dick, the film shares the schizophrenic author's long-running obsessions with concealed identity and humanity's potential inferiority to alternative life forms. Gary Sinise stars as Spencer John Olham, a respected government scientist in the year 2079 trying to devise a secret weapon that will help his fellow humans win a decade-long war with invading aliens that are cloning human subjects and using the replicas as walking time bombs. Suddenly, Olham is accused of being an alien spy and a nationwide manhunt to capture him ensues. With even his doctor wife (Madeleine Stowe) unsure that she can trust him, Olham must uncover the truth on his own, even as he's relentlessly pursued by Hathaway (Vincent D'Onofrio), a federal agent charged with destroying the clones.[1]

Imposter has a complicated history, originally produced in early 2000 as a 30-minute short to be included in an anthology entitled "The Light Years Trilogy," a project that never got off the ground. So impressed was Dimension Films with the completed piece, however, that the footage was incorporated into a new feature version. That film was then shuffled around the release schedule for more than a year as effects were completed, reshoots were ordered, and the film was recut for a PG-13 rating instead of its original R. The R-rated "director's cut" was later released on DVD.[3] 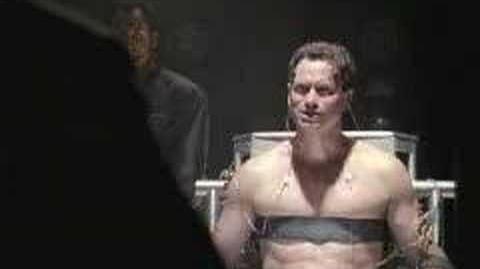