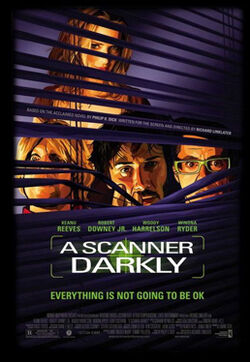 Director
Richard Linklater
Writer
Exec. Producer
Based on
A Scanner Darkly
Tagline
Everything is not going to be ok.
Released on
April 27, 2007
Runtime
100 minutes
Budget
$8.7 million
Gross
$76,066,841
IMDb Entry

A Scanner Darkly is a 2006 sci-fi thriller written and directed by Richard Linklater based on the novel of the same name by Philip K. Dick. Set in a near-future dystopia (a common Dickian theme), the film tells the story of identity and deception as citizens are constantly under intrusive high-tech police surveillance in the midst of a drug addiction epidemic. The movie was filmed digitally and then animated using interpolated rotoscope over the original footage, giving it its distinctive look.

The war on drugs has been lost, and when a reluctant undercover cop is ordered to spy on those he is closest to, the toll that the mission takes on his sanity is too great to comprehend in director Richard Linklater's rotoscoped take on Philip K. Dick's classic novel. With stratospheric concern over national security prompting paranoid government officials to begin spying on citizens, trust is a luxury and everyone is a suspected criminal until proven otherwise. Bob Arctor (Keanu Reeves) is a narcotics officer who is issued an order to spy on his friends and report back to headquarters. In addition to being a cop, though, Arctor is also an addict. His drug of choice is a ubiquitous street drug called Substance D, a drug known well for producing split personalities in its users.[1]

A Scanner Darkly is an astonishingly accurate adaptation of the book, though it streamlines the book to the point where the story is much easier to follow if you have the book in mind and can fill in the gaps yourself—and pull yourself away from the Waking Life/Slacker reverie induced by long, wandering, doped-out conversations.[2]

The film version adds one violent scene that more directly references the modern War On Drugs rather than Philip K. Dick’s ’70s version. It also telegraphs the ending of the story a great deal more, by getting New-Path and the organic nature of Substance D on the record very early in the film. It takes virtually all of the content directly from the book, relying on Dick’s situations, characters, and exact dialogue, and even relaying Dick's afterword about his friends, in the form of a post-film onscreen scroll.[2] 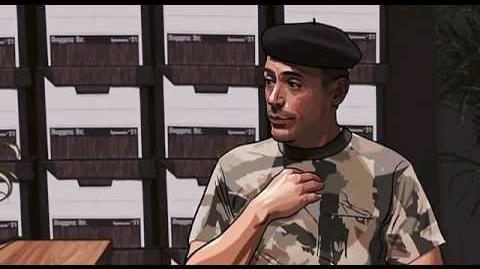